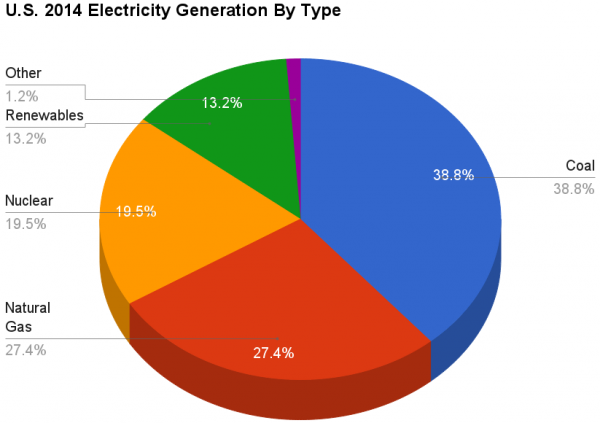 The cost of electricity varies greatly based on a number of factors: the prices of coal, natural gas, renewables and other sources of power.

Let’s examine some of the most important factors more closely:

A capacity factor measures the running intensity of a generating unit.

What does this mean?

For example, a capacity factor approaching 100% tells us that this unit is 1) operating near its maximum possible power output and 2) operating almost constantly. This increase of capacity factor indicates that electricity generation in the United States is shifting towards using a mix of energy sources. In fact, the use of coal steam power plants has experienced a steady decline in the past ten years, while the utilization of natural gas combined-cycle plants is much higher today.

Another factor that may affect electricity prices is the Mercury and Air Toxics Standards (MATS), which aims to limit the emission of mercury and other air toxics by reducing the use of coal power plants.

The law went into effect in April of 2015; however some plant operators are still operational and functioning on an extension plan. Eventually, these plants will need to change fuel sources, cease operation or integrate approved pollution controls to adhere with the new standards.

Taking into account all of the above, the United States Energy Information Administration (EIA) predicts a 7.1% reduction of coal generation in 2016, which will be offset by a 3.4% increase in the generation of natural gas.

Based on a combination of factors– such as lower natural gas costs, slower growth for electricity demand, and bureaucratic policies that encourage the use of renewables, the type and quantity of generating capacity being added annually is changing. On average, the U.S. has been adding 18.3 gigawatts of additional generating capacity annually since 1950.

Projections for 2016 include a total electricity generation in the United States to be around 11.1 terawatt-hours per day.

This summer, temperatures in the United States are projected to be lower than in 2015 with an estimated general 5% decrease. States in the South Atlantic, specifically, will have temperatures 10% lower than last year, a decline that will lower summer residential electricity bills by 5%. In contrast, temperatures in the North East central states are forecasted as 12% higher than 2015, which translates, according to the EIA, as an average residential bill increase of 8%.

Estimates from the EIA also include an increase to 12.9 cents per kWh in 2017.

In order to help the population decrease their monthly power bills, some utilities have begun the implementation of programs that promote the use of electricity during off-peak hours by offering rebates or reduced electricity rates. Through the use of home energy management systems and smart meters, users have the ability to decide how or when their households utilize electricity.

For instance, running a load of laundry at nighttime, considered to belong to off-peak hours, would cost customers less than if they were to run their washing machines or dryers in early evening hours. Since electric vehicles and plug-in hybrids usually recharge at night, time-based electricity programs could significantly help cut down the electricity costs of hybrid vehicle owners.

Utilities aren’t adequately accounting for the benefits that solar brings to the grid, including an energy source that decreases demand during peak use, reduces transmission and distribution costs, increases consumer choice, lowers greenhouse gas emissions and contributes to cleaner air.

As for the homeowners, when they begin to generate their own solar power, electricity bills can drop significantly.